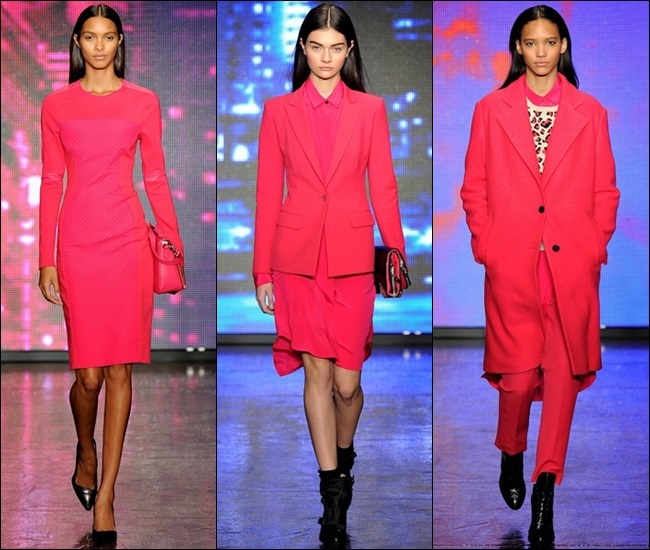 “Trench Kisses, A Collection of Classics and Christine Keeler.” With one of the opening looks – a leopard print top and knee-length skirt in translucent rubber which revealed the heart motifs of the model’s hot pants – encapsulating three of the main ingredients of Burberry Prorsum Fall Winter 2013 collection, this time, Christopher Bailey wowed the fashion world with youthful and playful materials as he exposed combination of a classic heritage world with sassy, sweet, sexy, and subversive looks.

Opened with selections that were dotted with love hearts, this collection was inspired by Christine Keeler, an English former model and showgirl, known for her role in a scandal – the Profumo affair – following her involvement with a minister in the early Sixties, which almost brought down the British government. With silhouettes inspired by the era, including cute fitted trenches with slim gold belts and contrast storm flaps, and animal-print wedge kitten heels with gold buckles, the house embraced its animal side in a big way.

The love heart prints weren’t all romance presented throughout the show, as Burberry took a walk on the wild side with leopard print knits and outerwear. The collection had a mix of animal print separates, dual colored trenches, bold/solid colors, heart prints and translucent leather-like outfits.

Some key looks included a ribbed beige sweater tucked into a pencil skirt in horizontal strips of leopard print in two different sizes, a trench coat with pattern that had abstract pieces of metal sewn into the body, a glossy oxblood snakeskin jacket, and a cashmere double-breasted camel style that nicely cleansed the palette.

Moreover, not only that oxblood and navy – two of winter’s hottest shades – were presented in modern frocks, each look was also packaged with a waist-belt or a pair of enviable heels – proving how accessories are really the finishing touch. Rubber incarnations served as a second skin for women, while leopard patterns as well as other themes inspired by animals continued to emerge on the catwalk, including prints of giraffes and python on coats and skirts. Thick silk and satin merging lists also appeared in the lineup.

4 Fashion, Beauty, And Skincare Tips To Combat The Summer Heat

THE STORY BEHIND THE LOUIS VUITTON NOÉ BAG

Is T-shirt Printing A Profitable Business During The Pandemic?